Here at TOLFA we rescue thousands of animals every year. For many there is a happy ending, and we are proud that we have been able to transform so many lives and give these animals a second chance

Sadly, some are in such bad condition when they arrive that we can only give them the love and comfort they deserve in their final days or moments.

If it is possible, we always try to return healed animals to their original territories or rehome them with a local family. If they cannot be returned or adopted, they will stay and receive lifelong sanctuary at TOLFA. See our Shelter Animals to meet some of the animals that live with us.

Below are just a few of our success stories – TOLFA’s Happy Tails.

A member of the public noticed that this friendly dog had a big wound on the back of his neck and called our rescue team – he was so happy to see them that he happily jumped right into the ambulance with a waggy tail!

As soon as he arrived at the hospital the triage and treatment team got to work removing all the crawling maggots that had infested his wound and flushed the area with antiseptic solution. He was such a good boy throughout his stay with us and after a few weeks he healed up really nicely -although his ear is a lot smaller now but he doesn’t mind!

As you can see in the picture, he also had deformed forelegs which is a result of rickets. He will have had this condition since he was a puppy and so unfortunately there was no treatment we could give him for this as an adult.

Rickets is most usually caused by Vitamin D or Phosphorus deficiency, although it can also happen when there is excess calcium in a puppy’s diet (this is common in large breed dogs). This is why it is very important to feed dogs a correctly balanced diet, especially for large and giant breeds.

This lovely boy copes very well on his bowed legs, and so he was sterilised and vaccinated against rabies before being released back to his home territory where his friendly neighbours continue to keep an eye on him. 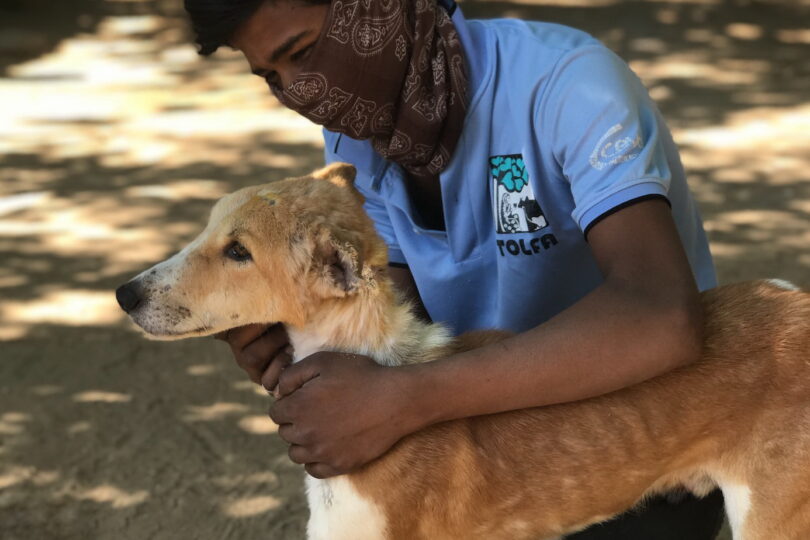 This little donkey foal was feeling rather sorry for himself when we admitted him with a nasty wound on his thigh. Of course his Mum came with him, and they’ve been together throughout their stay.

Fortunately, the wound was not complicated by infection or maggots and so was straightforward for our large animal team to treat. They administered pain relief and antibiotics and applied daily dressings until the wound started to heal. Within a couple of weeks he was feeling much happier, and our team were able to bandage his leg less frequently. He’s now fully recovered and is putting on weight nicely. His general body condition is really improving, and he’s grown quite a bit since his admission. We really believe that having his Mum by his side throughout it all helped him to heal. 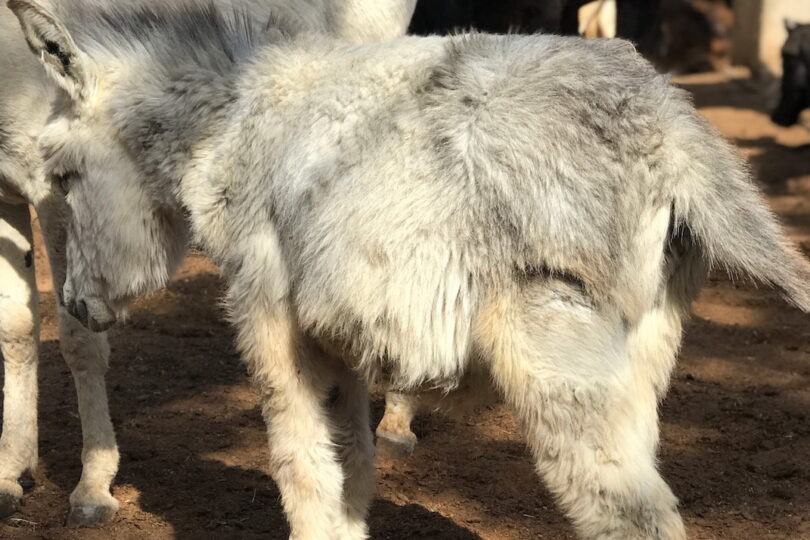 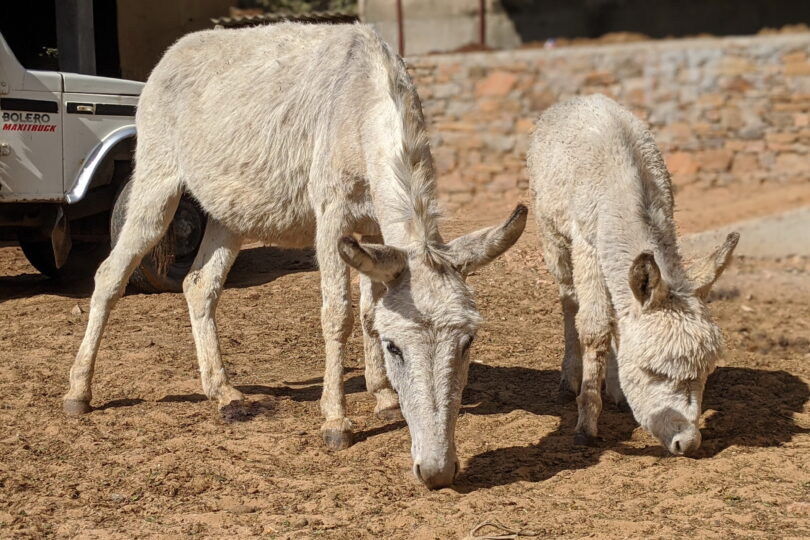 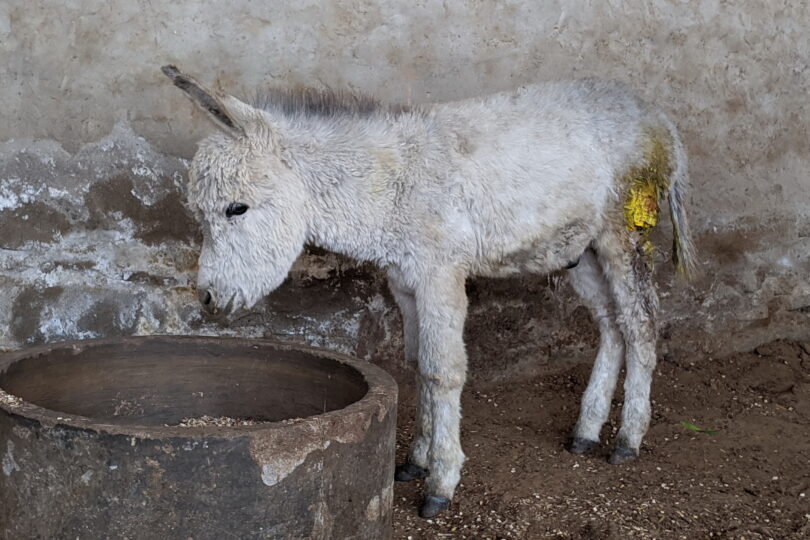 We rescued Bruno after he was reported to us with a neck wound. The wound had been caused by a rubber band being put on him as a small pup and as he grew the band cut deeper and deeper into his neck. It was a truly horrific injury and if left would without a doubt have resulted in his death. We were able to remove the band and treat the wound and Bruno is still a lively and friendly pup. We then had a visit from Reema and Sajan from our neighbouring village of Ajaysar. They both wanted to adopt pups, and guess who they chose? Our beautiful Bruno – healthy, happy, and now with a lovely home and owner too! Not only that but they also adopted Sammy, another pup who had been with us waiting for his forever home. 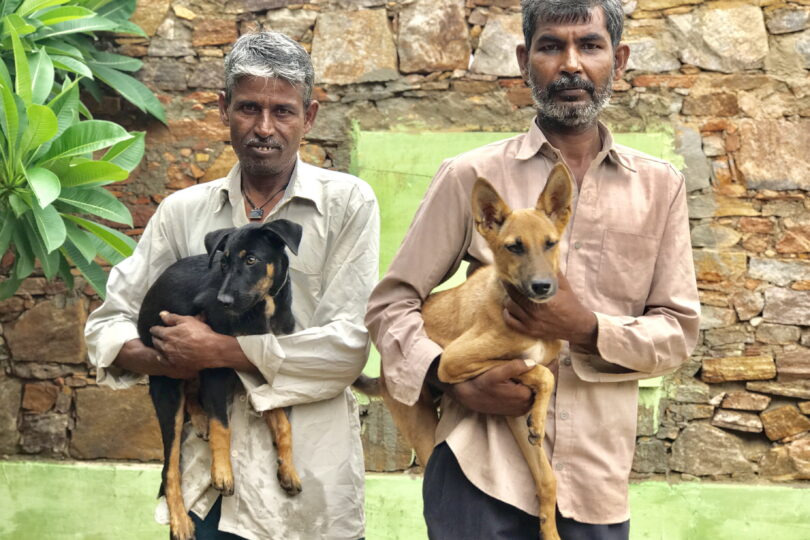 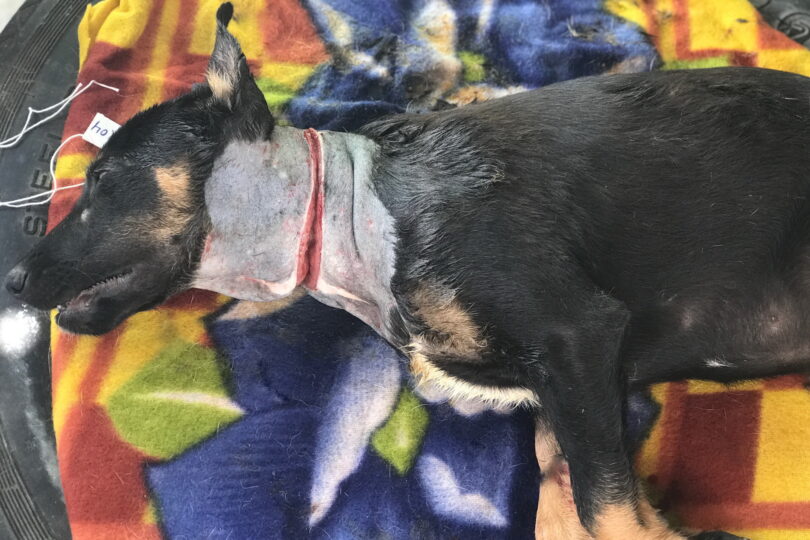 At only 3 months old poor George was brought to TOLFA with a really terrible case of mange. He had bald patches all over his body and horrible scaly skin on his face and ears. Mange can really deplete a young animal’s overall health and immunity, so George was treated with anti mange injections as well as extra vitamins & minerals.  He also had antiseptic dressings at first to soothe the crusty dry scabs on his skin.

Within a month George’s skin was showing great improvement, but it took some time for his beautiful coat to be restored. George was fostered by a friend of TOLFA and eventually adopted by a local family who run a guesthouse. 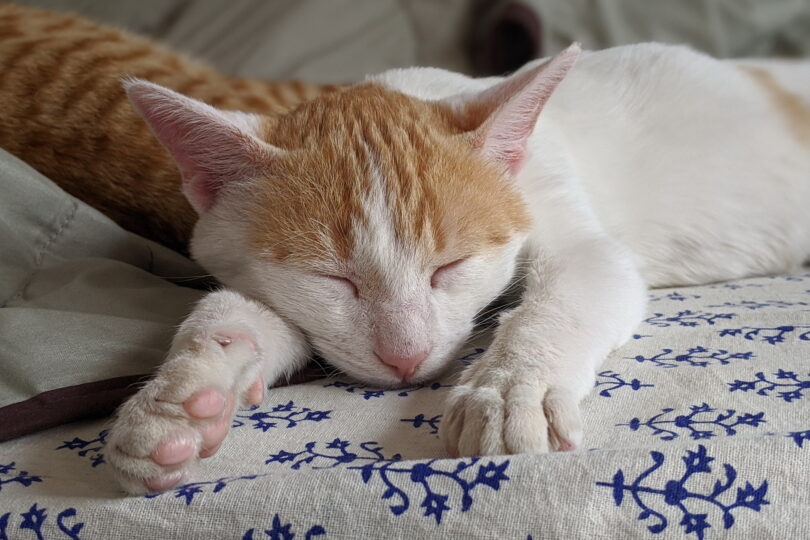 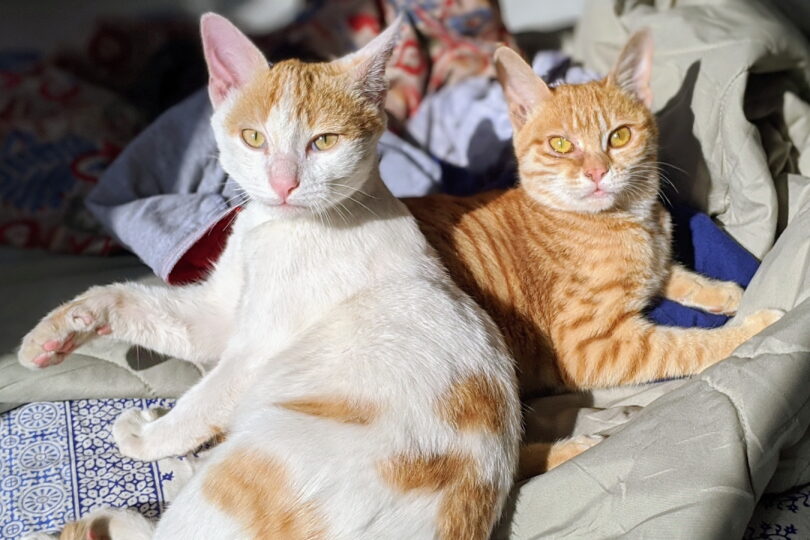 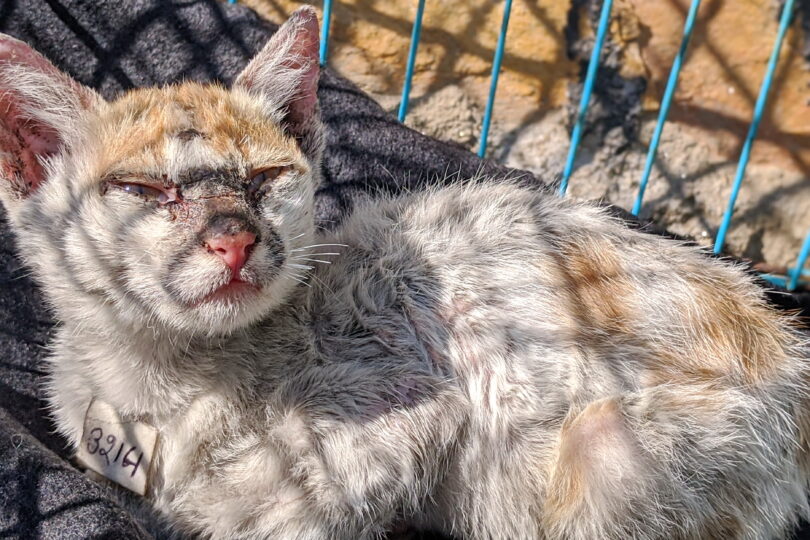 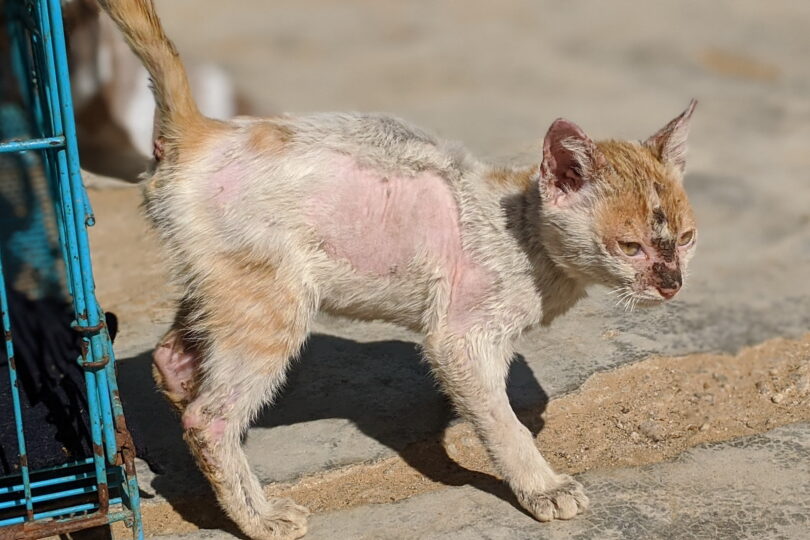 This gorgeous boy was hit by a train in Ajmer and sustained extensive injuries, losing both legs on the right side of his body in the accident.  With time and rehabilitation, Black Bear recovered and remarkably, has learnt to walk on just his two left legs. The strength and adaptability of these animals continues to inspire us every single day.   He now stays with us permanently as a shelter dog, safe under the branches of our Tree Of Life For Animals. You can watch Black Bear’s incredible story by clicking on the link below. 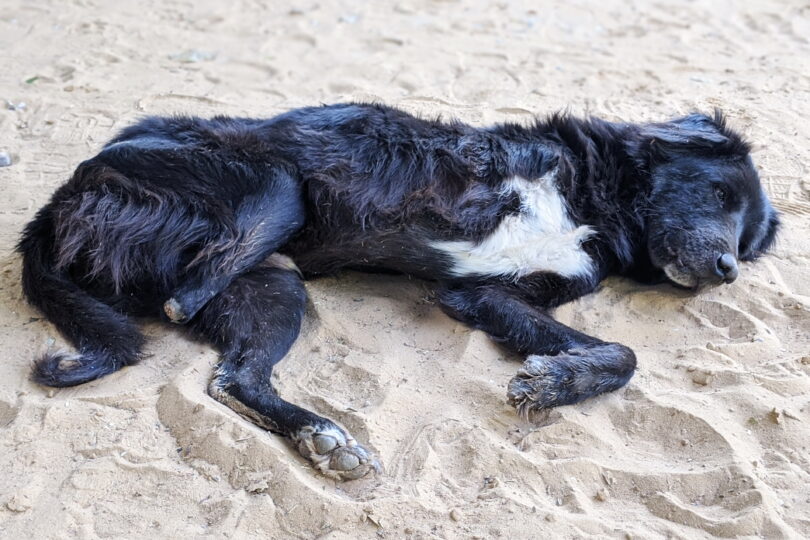 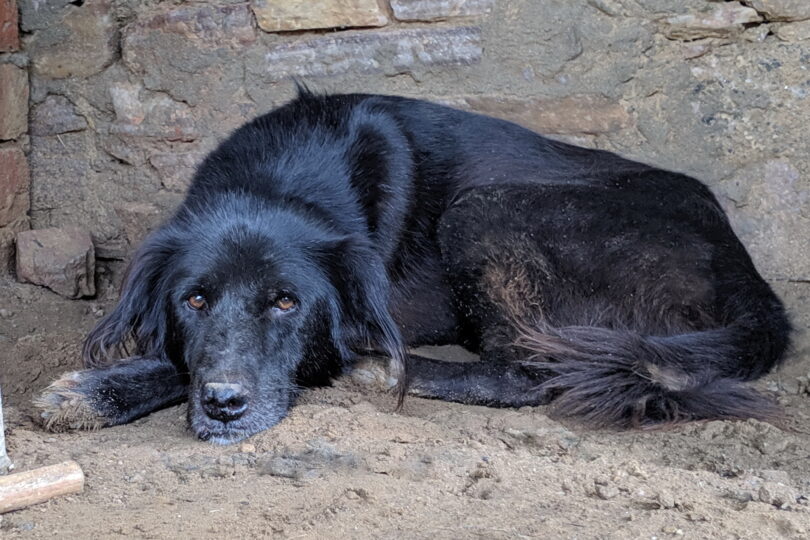 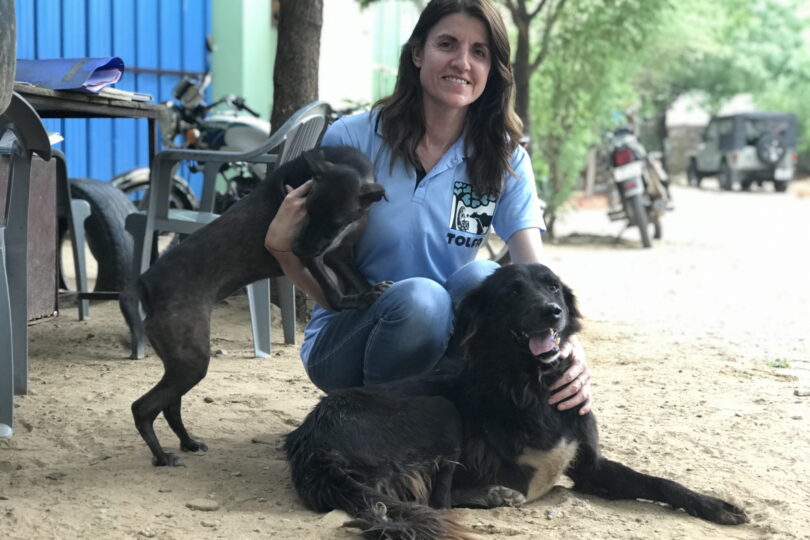 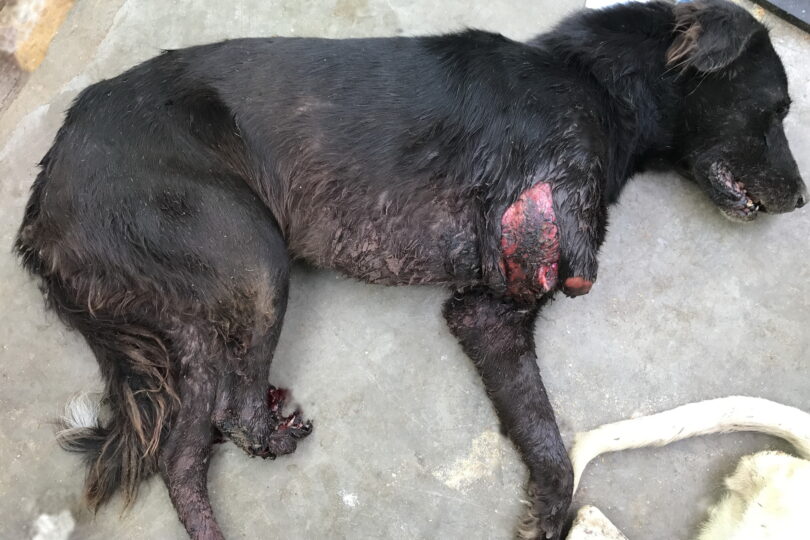 Sadly, we all too often see cows with fractured legs as a result of road traffic accidents. As the cows that have been abandoned on to the streets wander through the traffic in search of food, many are involved in accidents with passing vehicles. This very friendly cow, Maira, was one of the unlucky ones. Our ambulance rescued her as she had fractured her front left leg. She was given shock treatment and pain killers and her leg was plaster casted.

She was the perfect patient, loving nothing more than being scratched on her head. Our large animal team have become very talented at fixing broken bones – the cast did the trick and her bone healed really well. After her recovery, we released her to a reputable gaushala (cow shelter) so that she never has to fight for food and worry about the busy traffic ever again. 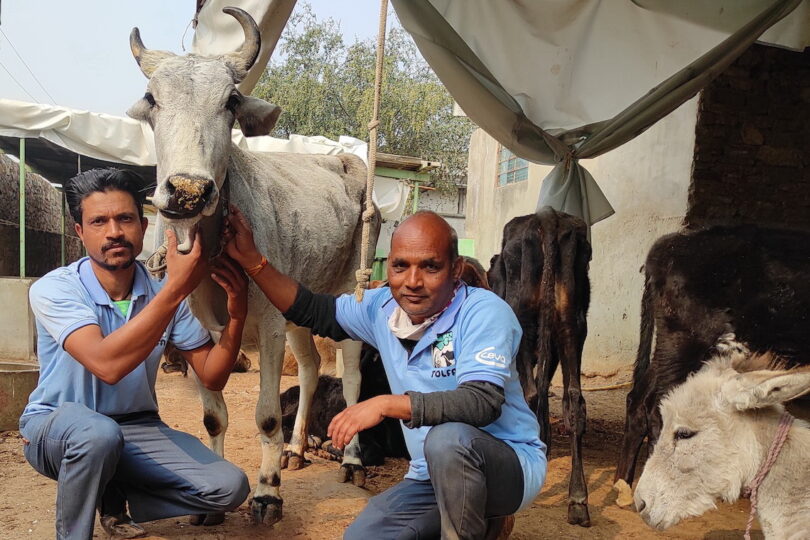 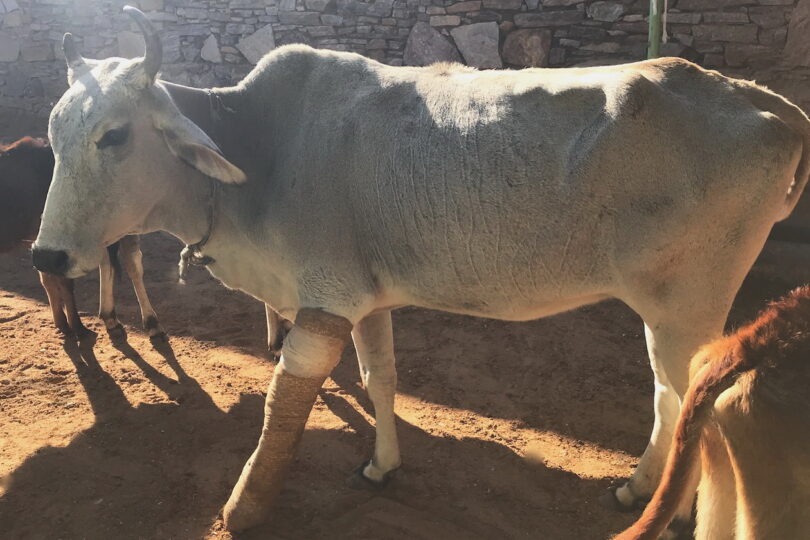